Simmer a slab of pork belly, drain and transfer to the air fryer. Thirty minutes later, you have perfectly cooked crispy pork belly with crackling skin.

I’m a recent air fryer convert. For the longest time, I resisted buying one despite my daughters’ pleas. My reason? There’s nothing that an air fryer can do that an oven can’t. And we have two ovens. So, an air fryer always seemed superfluous.

Then, my younger daughter, Alex, delivered the ultimate sales talk. You don’t need to preheat an air fryer, she said. And my perspective changed. During preheating, an oven guzzles up electricity. And there are times when preheating takes longer than actual cooking. I caved in. And it’s a decision I haven’t regretted.

We used to cook crispy pork belly in the oven. For over a decade, that was how we did it. Simmer a slab of meat on the stovetop then lay it on a rack positioned over a baking tray. It went into a very hot oven and we just waited for the skin to blister and turn into crackling. The result was always superb. But, in summer days, the heat that escaped from the oven turned the house into a bigger oven.

An air fryer is much smaller than a regular-sized oven. And because it does not need to be preheated, there’s a lot less stored heat in the house afterwards. That means we can have crispy pork belly more often.

So, how do we cook lechon kawali in an air fryer? The first stage has not changed. The pork belly is simmered in highly salted water with spices that include shallots, ginger, garlic, cracked peppercorns, bay leaves and, when available, lemongrass. When the pork is tender and the meat is literally falling apart, it’s ready for the air fryer.

No cooling and drying? Well, the pork is scooped out and left to drain on a rack for ten to fifteen minutes — just long enough to allow the meat juices to settle and stabilize. I do not believe in letting the meat dry for hours or, worse, under the sun. That’s like donating our meal to stray cats that roam the neighborhood.

Once the pork belly has dripped sufficiently, it goes into the air fryer. Now, here lies the difference. Inside an oven, especially a fan-assisted oven, with the top and bottom heat on, the pork belly will brown evenly with no need to turn it around. An air fryer has only once source of heat and it’s on the top. While that may be sufficient to make the skin crisp as crackling, the sides of the pork won’t brown enough to lose the texture of boiled meat.

In the air fryer, to brown every inch of the surface of the pork belly, the roasting has to be interrupted to turn the pork belly on its side. Both sides. By doing that, the browning becomes even.

So, the procedure is to allow the skin to brown and blister first before turning the pork belly on its side? Well, partially. The pork belly is initially roasted with the skin side up for seven minutes to remove moisture from the skin. That makes it easier to turn it into crackling later.

Connie Veneracion
This recipe works for one kilogram of pork belly cooked in a 1400W air fryer. The roasting temperature is 200C. If you have a smaller or larger slab of meat, or if your air fryer has a different wattage, you'll have to adjust the roasting time. 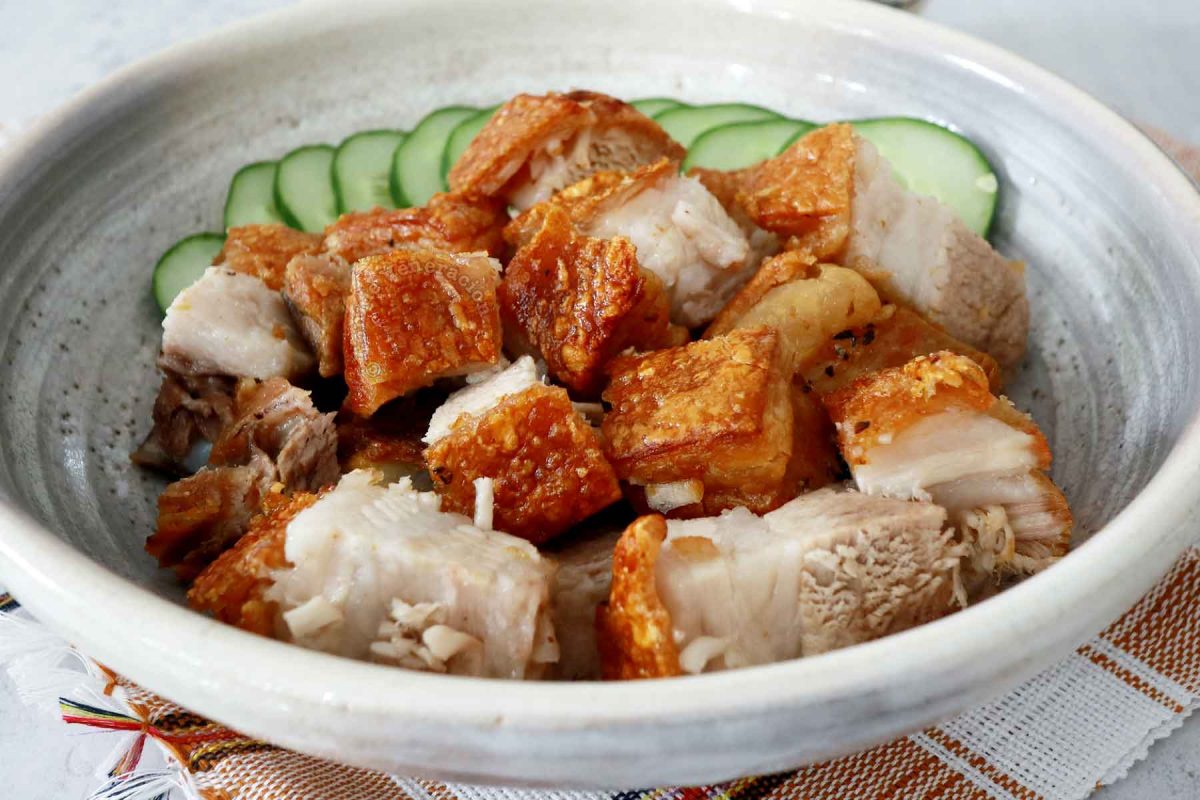 The cooking liquid will evapororate during cooking but do not be tempted to pour in additional water. That will dilute the flavors. If you’re worried that the pork won’t cook evenly, turn it on its sides occasionally.
Print Save! Saved!
Keyword Crispy pork belly 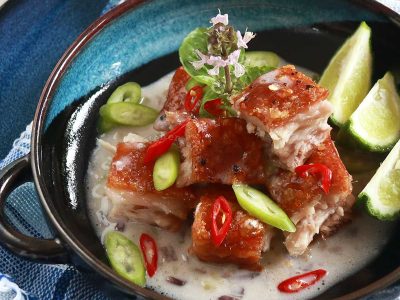 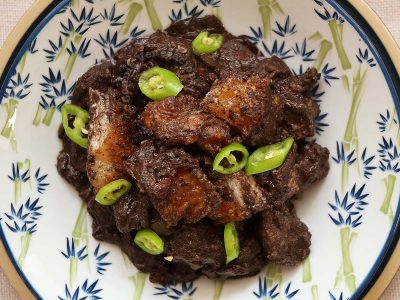 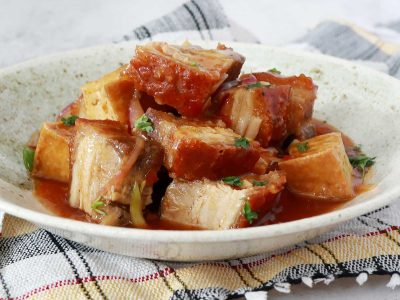