Make an easy snack by toasting flatbread and serving it with flavored cheese softened in the microwave. It's ready in five minutes but you'll remember it for the rest of your life. That good!

As weird as that combination sounds, it works. And it will get weirder as you reach the end of this post. Now, the story about how we became fans of this seemingly strange combination.

When my daughter, Alex, makes flatbread, we ask her to make them in bulk. Flatbreads are so easy to store in the freezer because they require very little space. And they are even easier to reheat because they are so thin. That means they can be prepared as a fast snack.

So, we had a stack of paratha that Alex made with fresh chives. One night, we wanted snacks and I was just planning on reheating a few pieces of paratha when I remembered that we bought flavored cream cheese that we hadn’t opened yet. I figured I might as well turn the cheese into a dip and cut the paratha to resemble tortilla chips.

I placed a stack of paratha on a cutting board to allow them to come to room temperature a bit while I prepped the cream cheese. I took out a bowl that’s the same size as the cheese and dropped the cheese in it. Minus the wrapping, of course.

I placed the crepe pan on the stove and set the heat on LOW. Meanwhile, I cut each paratha into six triangles. Not one by one, mind you. It’s easier and faster than that. I placed them one on top of the other, took a heavy knife and just cut through them. Even when cold, flatbread is easy to cut.

I spread the paratha triangles on the crepe pan and while the undersides were toasting, I popped the cheese into the microwave and set the timer for one minute. In that time, I was able to flip the paratha over, slide them on a plate and spread the second batch on the pan.

We feasted. The experience made me realize we should keep more flavored cream cheese in stock. Flatbread too.

Flatbreads you can use for a snack like this

It isn’t just paratha that can be used to scoop that lovely softened cheese. Pita, naan and tortilla will work too. Plain or flavored. And not necessarily homemade.

If you’re not into flatbreads (why not?), even store bought sliced bread can be used. Just cut into small pieces and toast. Not necessarily on a crepe pan (I chose it because of its wide surface which meant I could heat more pieces in every batch) but even in an oven toaster.

The thing about flavored cream cheese is that it costs more than plain cream cheese. And there’s very little you can do to adjust the flavors. Plain cream cheese will work too. Just add herbs and spices that you normally keep. Thinly sliced scallions, grated garlic, finely chopped sun-dried tomatoes, lime or lemon juice and zest… The possibilities are endless.

Not into cream cheese? We’ve tried this with cheese sauce (you know, the kind that you buy in jars to pour over nachos) and that works too. Paratha and nacho cheese sauce? Really? Sure. You’ll never really know what works unless you try. 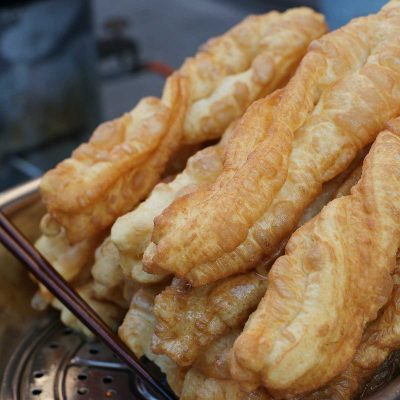